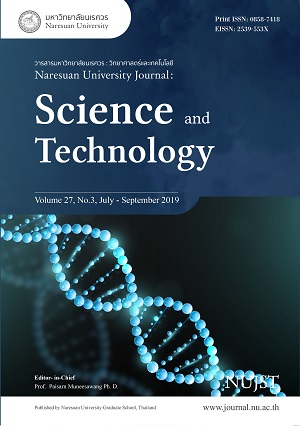 The present study aimed to determine the net reproductive rate (R0) and stable age distribution of the soybean leaf roller (Hedylepta indicata F.) on soybean (Glycine max L.). All experiments were conducted at the entomology laboratory of the School of Agriculture and Natural Resources, University of Phayao. At 24-h intervals, twelve pair of adult moths less than 24 hours, were transferred to a new set of host plants until all insects died. Consequently, the old host plants served as a source of the freshly laid eggs. The number of live daughters produced per day per female (mx) in her life time (lx) was determined and a net reproductive rate (R0) calculated.  The results show a value of R0 6.808, indicating that a population of H. indicata had the capacity of multiply 6.808 times in each generation under the given conditions. The stable age distribution was constructed with 1-day-old eggs of H. indicata. A Petri dishes containing 20 eggs each on soybean leaves were incubated in a rearing room held at 25±2 °C and 70±2% RH with 12 hours photo-phase. Ten replicates were run for a total of 200 eggs tested. After hatching, the early instar larvae were transferred singly into a 6x6x3.5 cm plastic cage. A tender leaf was placed into the cage to provide food for larva. At 24-h intervals, larva in each cage was transferred to a new leaf and the duration of each stage of development was observed until adult emergence. Newly emerged adult moths were examined daily until all of them had died. The investigation reveals that when the population reached the stable age distribution, 89.1% consisted of immature stages, and 10.9% of the total number of individuals were adults. The innate capacity for increase (r) attained in the given environment and the finite rate of increase (λ) was 0.0744 and 1.0772 respectively. When the birth rate (b) 0.6634 exceeded the death rate (d) 0.5890 then the population of H. indicata increased over each succeeding time period.